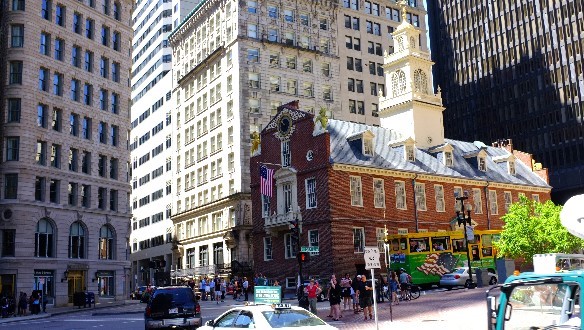 Boston is now officially my favourite US City...for the time being.

Boston in the summertime is just such a great place to be. The parks are teeming with life, be it joggers, sun worshippers or toddlers splashing in the Frog Pond, there is a constant buzz. It then strikes you why... there is a lack of traffic, especially for such a big city. The 16 year ‘Big Dig’ made this possible. The entire Interstate network that used to cut through the city centre is now underground leaving behind 300 acres of new parkland and hardly any traffic.

What to do in Boston? Simply loads. See the beginnings of a nation at the Tea Party Ships & Museums – re-enact the night of the 16th December 1773 and help throw a tea bundle in to the harbour or get yourself to Faneuil Hall Marketplace, a cobble-stoned arena showcasing the best street performers and musicians surrounded by a plethora of food stands and shops.

How about a walking tour? The Movie Mile Tour starts at Boston Common and takes you to the site of many movies and TV shows including Goodwill Hunting, Ted and Ally McBeal before finishing outside the ‘Cheers’ bar.

Take a different view of the city with a Boston Duck Tour, your conDUCKtor will bombard you with fun facts on your tour of the city which includes a splash and sail in the Charles River. Fancy some retail therapy? Then head out to The Outlets at Assembly Row, opened in May 2014 this is Boston’s newest premium brand outlet centre – it includes a LEGOLAND Discovery Centre, 12 screen movie complex, restaurants and scores of shops all within a 10 minute drive from the city centre.

For Dinner? It has to be the Union Oyster House, if it’s good enough for JFK and it seems, according to the photographs on the walls, most US Presidents since JFK then it is certainly good enough for me too. It didn’t disappoint. Boston is a great choice for a city break or the perfect start to a New England adventure. Special thanks to Gold Medal Travel and The Langham Hotel.